Posted: 12th July 2012
The thrash-metallers wind up their headline jaunt with a tasty looking homecoming show in Holmfirth, tickets on sale now 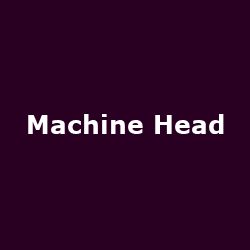 It's always the quiet ones, isn't it? Huddersfield might have a thriving live music scene of its own but it must still have come as something of a surprise when local thrash metal outfit Evile were charged by Kerrang! as singlehandedly 'reviving the genre'.

But Evile have made good on their early promise, emerging as one of the UK's leading metal bands. Their third record, 2011's Five Serpent's Teeth, was the first to be released following the tragic death of bassist Mike Alexander in 2009 and, to some extent, everything Evile do now is another testament to his memory and the band he helped create. And it is quite a legacy.

Drummer Ben Carter said of the new tour on the band's website: "We have a few new tricks up our sleeves as well as some old ones - we just can't wait to unleash our live assault once again!" Fortunately, it won't be too long before Evile are thrilling live audiences once more.

After a busy summer of festivals and European dates (including slots supporting Machine Head in Ireland), Evile kick off their autumn tour in Glasgow on 18th October, followed by dates in Manchester, Newcastle, Sheffield and more, before the final show, a homecoming, at the Holmfirth Picturedrome on 3rd November. The London show is at the Garage in Highbury on 28th October, with more dates likely to be announced soon. We have tickets available now, priced £13 for Highbury and £12.50 for all other dates.

Support for the tour comes from Swedish heavy metallers Wolf. Ahead of the autumn tour, Evile are playing the Bloodstock Open Air Festival 2012 in Derbyshire on 12th August. We have tickets available now priced £115 for a weekend camping ticket.