Posted: 15th May 2012
The former Pulp and Longpigs man is taking his seventh studio record on the road with a busy September and October, tickets Friday 18th May 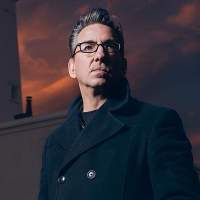 A few years ago, Richard Hawley was little more than that guy from Pulp but his profile soon blossomed into that of a celebrated singer-songwriter and one of this island's most cherished musical sons. A past that boasts the Longpigs and that stint in Pulp had set the Yorkshireman up for the new century nicely and a resulting, much-lauded solo career.

Richard Hawley's seventh studio LP, Standing at the Sky's Edge, was released last week, debuting at No 3 in the UK album chart and immediately becoming his most successful record to date. No coincidence then that the album also heralded a change in direction to more riff-laden guitar-led sounds, eschewing some of the subtlety of earlier efforts. Described as 'spangly' and 'riffy' by some, Standing at the Sky's Edge is Hawley's most commercially appealing solo recording to date and he is planning to take the new material on a national tour later in the year. With 6 Music and others already heavily rotating the new stuff, demand for the autumn dates will be high.

The tour kicks off at the Holmfirth Picture House on 16th September, moving on to Portsmouth, Bath, Leeds, Manchester, Glasgow and more, before the final date of the jaunt at the Brixton Academy on 3rd October 2012.

We will have tickets available from 9am on Friday 18th May for most dates although some are available now, including the Brixton gig. Tickets are priced £22.50 for London and £20 for other venues. Ahead of the autumn tour, Mr Hawley is playing a few shows across the summer including a gig at the HMV Forum in Kentish Town in June, the Mouth of the Tyne Festival 2012 and Latitude 2012 (both July) - we have a selection of Standard and Premium tickets available.