The Hives Go Right Ahead and announce 2012 UK tour 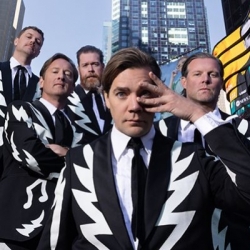 Hands up who thought The Hives were a little over ten years old? Yep, me too. But incredibly, 'Howlin'' Pete Almqvist's charges were assembled almost TWENTY years ago, during the early '90s (and that was after being in another band for a few years before!). But it took another four years before the contentiously-titled 'Barely Legal' album hit the shelves in 1997, with just half of the fourteen songs reaching two minutes in length. Visceral powerful relentless to the max, songs such as 'Hail Hail Spit n' Drool' and 'Uptempo Venomous Poison' kind of set out their stall. For Scandinavians, this lot could seriously 'kick ass'.

However, it was 2000 before the UK music press got a little bit excited about this smartly dressed bunch of Swedes, in particular the raucous paint-stripping singles, 'Main Offender' and 'Hate To Say I Told You So'. Erstwhile Creation head-honcho Alan McGee welcomed them onto his Poptones label imprint with open arms and converted their debut and second album ('Veni Vidi Vicious') into a compilation album. The Hives really were 'Your New Favourite Band', especially after both singles became hits after a re-release programme finally yielded rewards.

More hits, albums and a clutch of awards later, The Hives have a follow-up album to 2007's 'The Black and White Album' ready. Called 'Lex Hives', this fifth full-length set is something of a back-to-basics for the band (they've self-produced it on their own label), but if new single 'Go Right Ahead' is anything to go by, they've lost none of their trademark bullishness. You can catch them at the Leeds and Reading Festivals to see just how 'in your face' they remain.

Or you could catch them on tour - December sees the band return to the UK with a handful of shows, starting with Bristol on the 10th and followed by Birmingham, Glasgow, London and finally Manchester. Tickets are on sale from Friday at 9am, guaranteed to sell through very quickly at £17.50 (£18.50 for London).