We Are Scientists complete busy summer 2012 schedule with headline tour

Posted: 15th May 2012
The trio follow their Great Escape appearance with a summer of UK festivals and headline shows, tickets on sale now/Wednesday 16th May 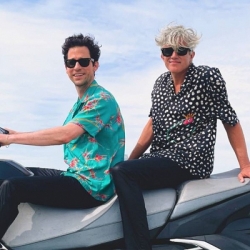 Having performed at last week's Great Escape festival in Brighton, We Are Scientists have announced a series of headline shows to complement an already hectic festival schedule (including three festivals in three days).

It's been 12 years since 'WAS' came into being in California. After a bit of squad rotation, Keith Murray and Chris Cain settled on lead vocals, guitar and bass duties between them and set about putting together their first studio album, 2002's Safety, Fun, and Learning (In That Order). Their undiminished love affair with the UK began with their second record, 2006's With Love and Squalor. Since then, and including their last outing, Barbara (2010), the UK has continued to warm to WAS's indie charms, with the Americans clocking up half-a-dozen Top 40 singles and a No 11 album in 2008's Brain Thrust Mastery.

The band have confirmed that they are currently working on a fifth LP and another busy summer of UK shows is likely to combine the old favourites with the best of Barbara and perhaps just one or two new tracks.

We Are Scientists' headline tour kicks off at Thekla in Bristol on 23rd July, followed by shows in London, Southsea, York, Manchester and finally Glasgow on 1st August. The London show is at The Garage on 25th July. We will have tickets for the headline tour available from 9am on Wednesday 15th May 2012, priced from around £12.

Throughout the summer, Keith, Chris and Andy complete their live schedule with a number of festival slots including Sheffield's Tramlines festival, Kendal Calling, Belladrum in Inverness, the Stockton Weekender and Derbyshire's Y-Not Festival on 5th August. We have a selection of tickets available now.