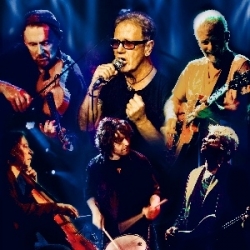 When someone hails a musical partnership as a marriage made in Heaven, they probably don't anticipate a few of them lasting quite as long as the one formed some 22 years ago between these two English folk stalwarts. After spending her early '60s career singing in Warwickshire and Oxfordshire folk clubs, June Tabor's traditional style became the perfect accompaniment to Maddy Prior's equally revered harmonies and the pair released a 1976 album as The Silly Sisters. This provided a foothold for Tabor, who went on to release her own solo-debut, 'Airs and Graces', by which time Oysterband had just formed in Whitstable, Kent (from where their name originates).

Early on, the band had the dubious honour of forming themselves alongside trad-folk dance band Fiddler's Dram and eventually scoring a hit with the (unintentionally) novelty smash, 'Day Trip to Bangor'. The various members formed the Oyster Ceilidh Band, dropped the 'ceilidh' bit and veered towards songs with stories, rather the latest moves. After almost a decade of credible albums, the band and June Tabor finally completed 'Freedom and Rain', a mix of traditional and contemporary covers, including Lou Reed's 'All Tomorrow's Parties' and Billy Bragg's 'Valentine's Day'.

With hugely successful careers behind them, it could be argued that the future is looking pretty rewarding as well. Having reconvened with those collaborative juices once again, on the triumphant 'Ragged Kingdom' album issued at the end of 2011, Tabor and Oysterband are an unlikely crossover with a deserving possible hit on their hands - a cover of Joy Division's 'Love Will Tear Us Apart'. Being one of those songs that 'just shouldn't be touched' (hello, Paul Young), this is an exceptional exception. Have a listen to it, embedded in this article - it was released today (14th May). Of course, you can't ignore the fact that the parent album has cleaned up at this year's BBC Folk Awards either.

Tabor herself has just appeared on BBC's Coast programme and with another TV appearance lined up this week (Jools Holland, no less); she and her band-mates are in demand. New tour dates featuring both artists together and separately are gradually tumbling onto the schedules, the newest of which include a double-header tour featuring both acts, starting in Whitley Bay on 6th December, followed by Manchester and Leeds, also in December. The Whitley Bay show is on sale priced at £20, the others go on sale on Tuesday 15th May at 9am.

You can also catch them both at the Cambridge and Sidmouth Folk Festivals, while Oysterband on their own are appearing at various spring and summer festivals in the south of England.