The Manchester three-piece are hitting the road with a hectic 23 gigs in a month, beginning in Coventry in September - tickets on sale now/Wednesday 16th May 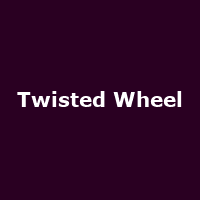 Despite being from Greater Manchester (Oldham, in fact), Twisted Wheel are not named after the legendary city centre Northern Soul nightspot but instead a Paul Weller lyric. Immediately gone are the inferred references to Manchester's musical past with the naming hinting instead at a more of a punk/mod bent. And so it proves.

Having earned Next Big Thing billing with their early releases around four years ago, Twisted Wheel have followed the issue of their self-titled 2009 debut album with what can only be described as lots and lots of touring. They've supported their hero Weller, Manchester bedfellows Oasis and a host of high-profile bands including The Enemy and Kasabian.

While on the road, their energetic if low-fi mod-inflected punk rock has won them an absolute army of fans. And, in true Wheel style, they are set to 'do it again' with an action-packed autumn schedule which would put most bands to shame.

The Do It Again tour kicks off on 19th September, taking in Hull, Bristol, Oxford, London, Manchester, Edinburgh, Lincoln and more, before the final date at Eric's in Liverpool on 16th October 2012. The London gig is at the 100 Club on 26th September.

We have tickets on sale now for some dates with the remainder available from 9am on Wednesday 16th May - all are priced around Â£10 or less.