Posted: 14th May 2012
Scottish rockers also due to play summer festivals and release new album in 2013, tickets on sale Friday 18th May 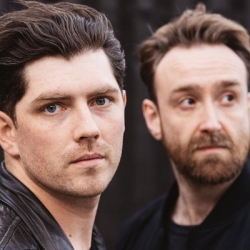 Now performing in what is their 5th anniversary year, tradition seems to suggest that such celebrations require the giving of a gift. The Queen is celebrating her 60th year on the throne, hence a Diamond Jubilee, while in 1977 she celebrated a Silver Jubilee (25 years). So, should you decide to offer a similar gift to Twin Atlantic in 2012, you should give them wood. No really, it's the material associated with five years of wedded bliss, or in the band's case, their solid bond with their loyal fans. And there are a LOT of fans, most of them initially swept off their feet by the band's boundless enthusiasm, seismic riffs and a very long line in memorable festival appearances and tours along the way.

Now you've stopped nudging and winking, let us tell you about Twin Atlantic's latest announcement - a full-scale UK tour in the autumn! Having already booked a place as supports to Blink-182 on their still-to-go-ahead UK jaunt this summer (alongside All-American Rejects), plus massive festival slots at Leeds/Reading and T in the Park and, deep breath, a Stateside slot on the US Vans Warped Tour, the fiery Scots will be rounding the year off back in the UK.

Not surprisingly, Twin Atlantic will be in Glasgow for their opening night on 29th October. They'll keep it Caledonian for the next two nights in Aberdeen and Edinburgh, before heading south to the likes of Newcastle, Manchester etc until reaching London on 8th November. Tickets for all shows will be on sale via us at 9am on Friday 18th May.

The band have prepped enough material for a new album, the follow-up to their chart-busting 2011 set 'Free', and is rumoured to be around a dozen songs with a release date mooted for very late 2012 or, most likely, early 2013.