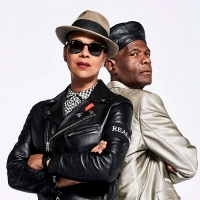 If you think Britain is a hot-bed of political, cultural, racial and financial unrest now, hop onto the net, do some research or, if you're old enough, cast your mind back to the average playground during the late '70s and early '80s. Never mind the b*llocks being spouted by parliamentary numbskulls, the topic of conversation between teenagers in those days centred on music and who was too cool for school. Assemblies, lessons and games periods often contained at least one reference to the current heroes and heroines of new-wave, punk, heavy-metal, pop, classic rock or disco, be it a quickly-scrawled name on your diary, hastily-scratched logos on the shower pipes or spitting on the pitch just like Sid Vicious might have done (and that was just the girls).

Ripe for artistic plagiarism was the 2-Tone phenomena, even if half the kids in rural middle England didn't 'get' its ethics or its purpose. You couldn't move for exercise books plastered with the familiar black and white image of the dandy young dude, dressed in natty suit and pork-pie hat. If you were daring enough to turn up to school dressed like it, you were back home suspended. A three-minute hero.

The whole point of 2-Tone was the 'black' and 'white', a coalition without prejudice and smart clothes, people and music to boot. Even females of the species were encouraged to join the ranks for some ranking full-stop, at a time when girls were shamefully shunned for being girls. Pauline Black was one such smart, stylish woman, who was hailed by Rolling Stone as being "possessed with the best voice on 2-Tone". They may have been right - Black became an icon for railing misplaced teenage girls across the nation. And she wore the dandy dude's clothes into the bargain.

Back in the day, hers and Neol Davies' ace band The Selecter didn't hang around for long - just three years brief existence saw them knock out two 2-Tone albums and the glorious Hammond-heavy rude-girl/ rude-boy anthems, 'On My Radio', 'Three Minute Hero' and 'Missing Words'. After 1980, they split, reformed in 1991 and split again before Black and Davies reinvented their own versions of the band in 2010 and 2011. Bo Selecter, indeed.

Pauline Black's version of The Selecter released a comeback album, 'Made in Britain', towards the end of last year and it is this, plus the classics and new toasting MC Gaps Hendrickson, that you'll hear on their upcoming UK tour in the autumn. First stop is Leicester on 4th October, followed by Luton, Oxford and many more until Bath's Komedia on the 21st. Tickets are on sale now, priced at around £15.