Posted: 11th May 2012
With the Inspiral Carpets continuing without him, the band's former vocalist is taking his solo material (and some Inspirals classics) on the road in September - tickets Monday 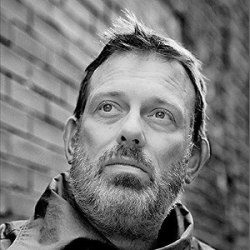 Tom Hingley's distinctive vocal and instantly recognisable bowl haircut, albeit an inferior do to Clint Boon's all-conquering fruit-bowl dome, crowned many a glorious indie moment at the end of the 1980s and into the early 90s. With the Inspiral Carpets, a band he joined as lead vocalist in 1989, seeing off someone called Noel Gallagher in the audition process, Hingley scored a handful of top-notch inspiring indie hits such as Joe, This Is How It Feels, She Comes in the Fall and Dragging Me Down.

The band split in the mid-nineties and Hingley, like Boon, began a solo career that lasted until an Inspirals reunion in 2003. Eight years on (and probably eight years longer than many thought the reformation would last), Hingley left the Inspiral Carpets and the band's original singer Stephen Holt returned to the line-up. At the time of writing, the restored Inspiral Carpets are supporting another Manchester stalwart, the Happy Mondays, on their reunion tour. By all accounts, it's going very well.

Not that it really matters to Tom Hingley. The polite, professional rhetoric following his departure from the band hints at a fundamental parting of ways that men in their middle years know better than to bitch about. Deep breaths all round and Hingley, always underrated as an artist in his own right, continues to take his solo material and a few Inspiral Carpets' standards on the road.

Tom Hingley kicks off his academy tour in Newcastle-upon-Tyne on 6th September, followed by shows in Liverpool, Birmingham and Bristol, before the final date at the Islington Academy on 13th September 2012. We will have tickets available from 9am on Monday 14th May, priced £7 to £8.

Ahead of the autumn dates, Tom is playing a handful of summer gigs including Wolverhampton (20th June), Edinburgh (5th July) and South sea (17th July) - we have tickets available now, again priced just £7 to £8.