Reckless Love to bring Animal Attraction to their autumn 2012 tour 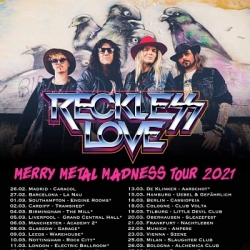 In recent years, interest in classic, glam and traditional rock and metal has increased somewhat. Perhaps it's the weather, or the austerity measures or perhaps the thought of more depressing news for years to come. You need to lighten up and what better way than to embrace a Finnish glam-metal band who themselves have wrapped their arms around that most decadent of decades, the eighties. Let's face it, if you're going to indulge in a spot of 'hair-metal' or 'poodle-rock', you've got to head to the era that gave you Poison, Guns 'N Roses, Cinderella, Thunder and Skid Row, right?

Finland is perhaps best known for the darker side of metal with bands such as Stratovarius, Impaled Nazarene and Eurovision-winners Lordi, which may explain Reckless Love's refusal to revert to type - this is a band with love, girls, sex and more sex on their minds. Formed in 2001, Reckless Love were initially a Guns 'N' Roses covers band. Clearly, Finland already has a stockpile of such entertainment because the band ditched the concept by 2005 and opted to write their own songs. By 2009, they had succeeded in compiling a self-titled debut album, earning them a Top 20 success in their homeland.

For album number two, 'Animal Attraction', Reckless Love have stuck to the same formula and blasted their way into the Finnish Top 10. With album tracks such as 'Dirty Dreams', 'Switchblade Babe' and recent single, 'On The Radio', you can pretty much guess what these boys are all about. In the autumn, you'll be able to also see what they're about - that's right, they're heading your way for a tour.

After performing at Download in June, Reckless Love will return to the UK for a nationwide tour which includes no less than FOUR London shows. They start in the capital with the first of four slots at the Barfly on 4th October, followed by Sheffield on 5th , then Newcastle, Norwich and more until Brighton on the 24th and a final trip to London's Barfly on the 25th (the other shows at this venue also take place weekly on 11th and 18th).