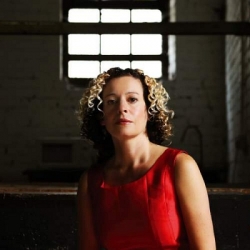 You might be wondering where the complimentary and descriptive expression 'Barnsley Nightingale' comes from, to which I would reply, 'check out Kate Rusby's albums and you'll see in an instant'. Hailing from South Yorkshire, Rusby has pieces of Sheffield, the Pennines and indeed Barnsley within her repertoire, although her voice suggests she's been gargling honey and drinking nothing stronger than hot, sweet tea - it is a gentle soothing treat, to say the very least. If you ever want your ears massaged, Rusby's voice would prove a suitable set of nimble aural fingers.

Her earliest work involved collaborations with fellow folk singer Kathryn Roberts and the roots 'supergroup' Equation (with Roberts and Lakemans Seth and Sean, only to leave and be replaced by Cara Dillon), but it's her solo canon that has earned her considerable kudos. With the very recent birth of her second child, her Mercury Music Prize-nominated album 'Sleepless' might prove to be a painful portent of things to come, while other the more recent 'The Girl Who Couldn't Fly' and 'Awkward Annie' have provided her with Top 50 albums. Family distractions permitting, she should have her next new album out sometime in the autumn.

For the rest of 2012, Rusby will be chilling out until later this year when she will once again hit the road for an extensive trail of concerts throughout late summer and into the winter. First stop is Macclesfield on 17th August, followed by various towns including Barnstaple, St Ives (for their festival), Halifax, St Albans and many more, including a Royal Festival Hall show in London on 23rd October and The Lowry in Salford on 20th November, before settling down in Birmingham's Symphony Hall on 19th December. Tickets are available now, priced at around £20 for most shows.