Posted: 9th May 2012
Richard Butler and co return to play classic album and more, tickets on sale Friday 11th May 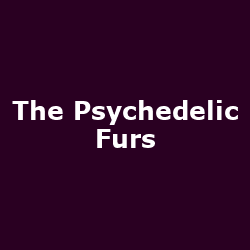 For a band that formed in London in 1977, the past 35 years have been a bit of a blur and a mixed bag of fortunes. After an initial period of naming themselves RKO and The Europeans, the brothers Butler and co opted for the far lusher, luxuriant and mysterious moniker of The Psychedelic Furs. Although not very psychedelic musically, the band offered up a tuneful and thoughtful alternative to other so-called post-punk luminaries.

Their self-titled debut album was a slow-burning beast with 'Sister Europe' and 'India' perhaps two of their most unnerving songs thus far. But it was album number two that opened doors for them, particularly in the US. 'Talk Talk Talk' didn't exactly set the world alight upon release with the singles 'Dumb Waiters', 'Mr Jones' and 'Pretty in Pink' all failing to chart on either side of the Atlantic in 1981. By 1986 however, a film entitled 'Pretty in Pink' (teen drama by John Hughes) ensured its place in music history and a new audience for 'Talk Talk Talk'.

Up until 1986, Richard Butler's charges had issued another two albums, 'Forever Now' in 1982 and 'Mirror Moves' in 1984, but had little success with the first one, despite containing a couple of stone-cold classics in 'Love My Way' and 'President Gas'. 'Mirror Moves' was slicker and eschewed the trademark scratchy guitars for polished synths. Songs were admittedly sharper and more commercial, particularly the heavenly 'Heaven' and grittier club-hit 'Heartbeat'. But 'Pretty in Pink' continued to remain a signature tune and earned a remix and a hit two years later. The States stuck by them for the remainder of their career, while the UK discovered PWL and acid-house - bye-bye Furs.

Thankfully, after regrouping in 2001, The Psychedelic Furs continue to tour despite releasing their last studio album as far back as 1991, the excellent 'World Outside'. This summer will mark their return to these shores with another tour devoted primarily to 'Talk Talk Talk', 'Forever Now' (30 year anniversary) and more - in fact, you could end up with a career-spanning show. Special guests are lined-up and so are the dates!

First stop is Edinburgh on 29th June, followed by York, a slot at Hop Farm Festival on 1st July, Manchester, Bristol, London and Nottingham on 6th July. All tickets except Edinburgh and Hop Farm are on sale via us on Friday 11th May at 9am, priced at £22.50-£25.