Posted: 8th May 2012
Oh What a Night! The Frankie Valli and the Four Seasons musical continues its extraordinary success, tickets on sale now 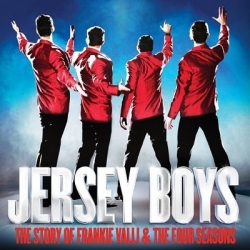 If you have ever attended a pub quiz and been faced with the question, 'how many Frankie Valli and the Four Seasons songs can you name', chances are you may well have waved that top prize of a bottle of rioja/Heineken/Blue Nun (delete where inappropriate) goodbye. The thing is; Valli's songs are more famous than you think, many having been covered by more contemporary artists or used in countless adverts and soundtracks. Certainly before The Beatles, the US rocked and rolled to The Four Seasons to the eventual tune of over 170 MILLION sales worldwide.

So hats off to the two Bobs, Messrs Gaudio (one of the Four Seasons' founders) and Crowe plus writers Marshall Brickman and Rick Elice, not forgetting Frankie Valli, founder of the Four Seasons and the man behind the story, for having the bravery to help create a musical documentary about one of the biggest groups in '60s American culture. Actually, make that worldwide. Before Valli's own successes on the Grease soundtrack, including the memorable theme song, 'Grease is the Word', the man and his band members wrote and co-wrote some of the biggest hits of the era.

Jersey Boys includes all of those songs and more, some well-known, some less well-known but all classics. 'December 1963 (Oh, What a Night)', 'Sherry', 'Walk Like a Man', 'Can't Take My Eyes Off You', 'Working My Way Back to You', 'Rag Doll', 'My Eyes Adored You' and 'Let's Hang On' - they're all here, jam-packed into two-and-a-half hours of solid entertainment.

As well as the musical numbers, there is of course a plot, a serious one with bright comedic moments a-plenty. Follow the fortunes and misfortunes of a band who rocketed to fame, struggled with debts and were eventually inducted into the coveted Rock and Roll Hall of Fame in the '90s.

The West End version, staged by the Broadway creative team no less, is currently playing at the Prince Edward Theatre and will continue to do so for an even longer period - the critically-acclaimed show has just been extended to February 2013 with bookings now available via us for £37.50 Grand Circle Seats, right up to £67.50 for Top Price Stalls. Hurry though - the best seats in the house will sell very quickly!