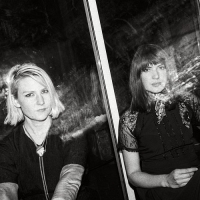 As folky, country, bluesy duos go, The Smoke Fairies have a considerable CV to thrust into the faces of any future record company executive. For the past decade or so, Katherine Blamire and Jessica Davies have been squeezing their way into the nation's psyche by just being on the right bill, or in the right place at the right time.

So, cop a load of these factoids. In 2007 they supported ex-Roxy Music crooner Bryan Ferry on a UK tour. Richard Hawley lost control of his superlatives by describing them as 'the best thing I've heard in years', before installing them as support on his 2009 tour. They became the first British act to release a single on Jack White's Third Man Records imprint, performed at SXSW a year later and then, finally, got around to issuing their debut album, 'Through Low Light and Trees'. They caught the 7" single bug by unleashing half a dozen of them as limited edition collectables throughout 2010 and 2011, as well as appearing on Richard Hawley's hard-to-find 10" 'False Lights From The Land EP', which brings us nicely up to date, if a little out of breath.

For 2012, The Smoke Fairies are taking things easy by issuing their sophomore album at the end of this month and touring the UK in the autumn. Oh hang on - that's not really putting your feet up is it? 'Blood Speaks' is out on 21st May, while the tour which follows a few European shows, starts in Cardiff on 18th September, followed by Portsmouth, Brighton, Norwich and lots more in the north and Scotland, until Cambridge on 8th October.

Tickets are priced at under a tenner, which is a bargain given their pedigree, and are available now! For those Londoners perplexed at their city's omission from that roster, you have a show at Notting Hill's Tabernacle on 28th May, priced a little more at £12.