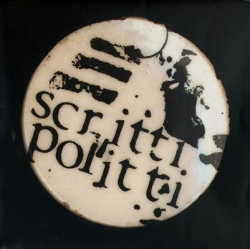 You might be surprised (or horrified) to learn that Scritti Politti's sweetly crooned and sugary-pop chops didn't come from being reared in some sleepy village in rural England, but instead came from art-school boredom, Chelsea, social and political awareness and post-punk squats - all very much a far cry from Smash Hits interviews and having your song covered by Madness.

To start from the very beginning, lead singer and only remaining Scritti founder, Green Gartside, jacked in an arts course in Leeds to head south to live in a squat in Camden in the late '70s. After some time, he presented the Rough Trade label with a demo tape of a song called 'The 'Sweetest Girl'', which eventually found its way onto a front-cover giveaway tape in NME. Despite several major label offers, he stuck with Rough Trade and completed what many fans consider to be Gartside's finest release, the album 'Songs to Remember'. Packed with strings, gospel vocalists and tight arrangements, it sounded like a million dollars rather than the seven-quid asking price. Scritti Politti had certainly left squats, Peel Sessions and the rough and ready DIY hybrid of first single, 'Skank Bloc Bologna' (good though it was), far behind - and there was more to come in 1985.

Virgin Records successfully prised him away from independent labels and turned those near-misses of 'The 'Sweetest Girl'', 'Faithless' and 'Asylums in Jerusalem' into memorable smoother hits such as 'Wood Beez (Pray Like Aretha Franklin)', 'Absolute' and 'The Word Girl' - job done. Further albums in though, the hits dried up and Gartside retreated, issuing just two albums in 18 years, the last being 2006's 'White Bread, Black Beer'. Last year's 'Absolute' compilation has drawn renewed interest though, to the point where Scritti Politti are heading back with new material and a chunk of live action later this year.

The new tour, a follow-up to their recent sell-out Bush Hall shows and a complement to their festival appearances at this year's Apple Cart and Green Man gatherings, will begin in Nottingham on 2nd August, followed by Leeds, Hebden Bridge and two weeks later in Bristol, which might suggest that more shows will be added to fill that gap in the calendar. Tickets are available now, priced at around £14-£15.