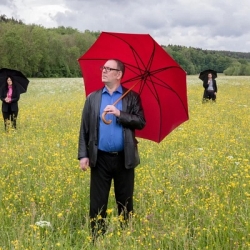 Recently, John Peel's record collection was posted onto the internet for the first time, enabling keen music-spotters to see inside the man's treasure trove. So far, just 100 images of very eclectic records from the letter 'A' have been uploaded onto the Space (as it's called) and, because its Peel, you can nod knowingly as to why he'd have all three ABC albums, filed alongside The Abyssinians (reggae) and Abdel Gadir Salim (Sudanese roots). By the time they get to 'N', his beloved Nightingales will have finished touring, but you'd expect at least one or two of the post-punk legends' classics to be in there somewhere. Probably near to Napalm Death and Youssou N'Dour.

The Nightingales have just recently issued their seventh studio album via Cooking Vinyl. Entitled 'No Love Lost', it's as brazen and as boisterous as you'd expect Robert Lloyd's band to be. And, believe me, they have been very brazen and very boisterous. Whilst not an out-and-out punk-band, The Nightingales were Birmingham's alternative to Manchester's The Fall, in the sense that lyrics were often darkly-humoured, wordy and surreal and the music naggingly atonal, yet alluring.

They recorded nearly as many Peel Sessions as Mark E. Smith's powerhouses and Liverpool's Half Man Half Biscuit and became something of a religion for many listeners back in the early '80s. Debut album 'Pigs On Purpose' was a rich mixture of artful pathos and bluster and became a fixture on the then-Indie Charts. After two more albums, 'Hysterics' in 1983 and 'In The Good Old Country Way' in 1986, The Nightingales separated for twenty years or so, reforming in 2004 and beginning a prolific string of albums, right up to this latest belter.

Later this month, The Nightingales will be escorted on a full UK tour by long-time mate and dead-pan alternative comedian Ted Chippington, another Peel hero who has released a somewhat bewildering selection of cover-versions including 'The Wanderer', 'D.I.S.C.O.' and 'She Loves You', as well as the classic 'Man in a Suitcase' album. After years of truck-driving in the States, he's back performing with new material.

The tour begins in Shrewsbury on 29th May, followed by Brighton, London, Southampton and many more until a rare stop in Kidderminster on 10th June. All tickets are available now for a tenner or less in most cases. Enjoy.