Posted: 2nd May 2012
The 11-date tour marks the 30th anniversary of legendary albums The Changeling and Warrior Rock - tickets on sale now/Friday 4th May 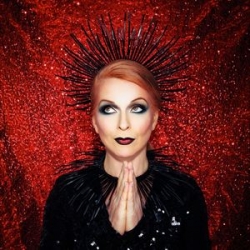 Following the success of a sold-out spring tour mark three decades since the release of Toyah's fourth album, The Changeling, the former punk pixie is taking the show back out on the road; this time coupling it with the anniversary of her second album of 1982, the live record Warrior Rock.

The new dates will see the diminutive star perform a 'true celebration and re-interpretation' of what is undoubtedly one of her finest works, alongside a collection of hit singles including I Want To Be Free and Thunder In The Mountains. In more recent times, Toyah has continued her highly credible career as a TV and film actress and made a number of high profile guest appearances. Thankfully, in recent years she has returned to her first love as a highly decorated punk pop star with a distinctly theatrical accent.

The Changeling Resurrection II Tour kicks off in Middlesbrough on 19th September, followed by dates in Glasgow, Manchester, London, Birmingham and more, before the final gig at Concorde 2 in Brighton on 3rd November 2012. The London show is at the Islington Academy on Saturday 20th October.

We have some tickets available now with the remainder going on sale at 9am on Friday 4th May, priced generally from around £18.

Ahead of the autumn tour, Toyah has another busy summer of festival appearances including Here and Now - The Very Best of the 80s in Glasgow in July (£36), Lytham Proms Festival Weekend 2012 in early August (£24.50) and Audley End 2012 in Saffron Walden a day later (£35). We have tickets for all these and more Toyah gigs (see below) available now.