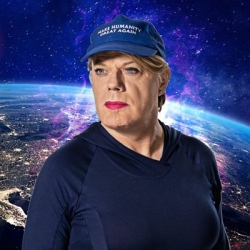 Already part of the biggest comedy world jaunt ever known to man, Izzard will be gracing the UK with his outstanding, outrageous, outspoken out-there new show, 'Force Majeure'. This latest masterly routine follows on from his previous 'ooh la-la' 2011 Paris residency (he performed 'Stripped' in French, as you do) and heralds an exciting era in Eddie Izzard's career.

But, even with some places having more than one confirmed show, Izzard's powers and prowess has ensured that pretty much all of the original batch are down to the last few tickets (with the exception of his Eden Project stop on 3rd June).

With the extra shows, his tour will now commence in Aberdeen on the new opening night of 2nd May 2013, followed by dozens more across the UK until London in June. As well as Aberdeen, other extra shows include May dates in Wembley (12th), Birmingham (15th), Cardiff(17th), Bournemouth (20th), Nottingham (22nd), then June shows in Brighton (2nd), Manchester (6th) and, as a new closing date, London's O2 Arena on 9th June 2013.

We have tickets for all shows available now, priced from £35 (£40 for Belfast/ London)