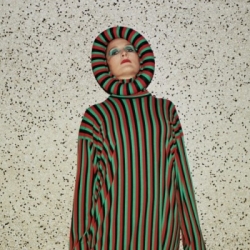 Blessed with the same surname as a certain Duran Duran heartthrob, but in no way related, Cate Le Bon has been described as many things by critics and journos, most of them good. "Like a Valley-born Nico locked in the cupboard" is probably the most indicative (cheers, Q), although barely scratches the surface of what this young lady has been busying herself with prior to singing in English.

Her first EP was the 2008 Welsh-language offering, 'Edrych yn Llygaid Ceffyl' which, when translated, means (unsettlingly) 'Looking in the Eyes Of a Borrowed Horse'. Gulp. That and her follow-up single, 'No One Can Drag Me Down' attracted the attentions of one-time Super Furry Animals' frontman, musician and future collaborator, Gruff Rhys, who has also apparently cited Nico as a comparison to Le Bon. The Rhys connection has since continued with her lending vocals to a Boom Bip track and the aforementioned Welshman's Neon Neon project (also with Boom Bip).

2009 marked Le Bon's long-awaited foray into 'album-world'. 'Me Oh My' saw the singer resort to the English language for the vast majority of the tracks, which made life easier for critics to judge it on. She got 8 out of 10 in NME, enough said. Her new-album 'CYRK', which isn't a Welsh moniker (it's Polish for 'circus'), has already drawn comparisons with Nico (again), John Cale and even Stephen Malkmus. Of a lighter but still unsettling form is album-track 'Fold the Cloth'.

With one eye on longevity and continued support (BBC6 Music have been playing songs from it), Le Bon will be out on tour later this year, starting with Liverpool on 6th September and followed by Leeds, Glasgow, London and more until a homecoming in Carmarthen on the 15th. Tickets are on sale from us now, priced at under a tenner!

In addition to her own headliners, Cate will be supporting Perfume Genius on their nearly sold-out tour in May, as well as the Brian Jonestown Massacre in July - tickets are also on sale now for remaining shows.