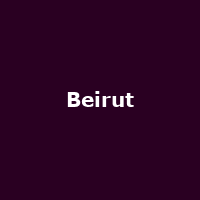 The name Zach Condon evokes a star in old-time Hollywood movies, perhaps romantic thrillers or rugged spy movies before glorious Technicolor. But Condon and his vaudevillian Eastern-jazz 'n' folk band Beirut deal in a very different world to the make-believe of the red carpet.

For a start, Condon hails from the grittier environs of New Mexico and railroad city of Newport News in Virginia and, while working as a cinema guide, gained an interest in world cinema, in particular the soundtracks. Add in his obvious Mexican heritage, its Mariachi music and the ubiquitous European travelling in his teens and you have a man bitten by the creative bug. Upon his return, Beirut (the band) was born and an album released in 2006.

'Gulag Orkestar' was essentially a solo album with a couple of guests performing strings and drums and, whilst warmly received, it was the follow-up that garnered far more attention. The UK's 4AD picked up on his Slavic tendencies and signed him to make 'The Flying Club Cup' in 2007. Mixing all of his influences into the aural equivalent of a happy drunken night out in a Paris bar, Condon ticked a few boxes amongst critics and suddenly shows were selling out and listeners were lapping up Beirut, which is what they've also been doing with the 2011 release, 'The Rip Tide'.

Possessed of a poppier edge, yet still retaining the rousing raggle-taggle elements of earlier releases, the new album is a confection of hazy summers and reflective winters, somehow translated into a brassy euphoria that works. Check out 'Vagabond', embedded here and set in bygone times of conscription and lots of smoking.

Beirut will be heading out on tour in September, starting in Glasgow on 11th, followed by Leeds and Hammersmith. More shows may be added in due course, meanwhile tickets cost £20 for these.

If you fancy seeing Beirut beforehand, then you should consider heading to Field Day 2012 in London on 2nd June - the band are on the line-up alongside Franz Ferdinand, SBTRKT, Tortoise, Mazzy Star etc. £45 to get in.

OR you could get in for absolutely nothing, FREE and gratis by entering our fabulous easy-peasy Field Day/Apple Cart competition!! We have a pair of joint tickets to attend BOTH festivals on 2nd and 3rd June - just click on the Enter Competition button below, but hurry: the competition closes on Friday 4th May!!