Poliça continue surge with more UK and Ireland shows for 2013 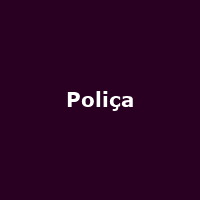 The rise and rise of US dream-pop outfit Poliça continues with the announcement of more tour-dates in 2013. To follow up their previously announced November jaunt around the UK, the group will return in the New Year for a clutch of shows that so far include the Shepherd's Bush Empire on 21st March, followed by Birmingham on the 22nd and Dublin on the 23rd. Tickets are available for all three now, priced at £13.50 for London and £10 for Birmingham and 17.50 for Dublin.

This isn't the first time we've championed a band on Memphis Industries and it certainly won't be the last - it's a shame the rest of the press haven't got excited over label-mates The Phoenix Foundation, The Go! Team, Elephant and Milagres. But they have with new signings Poliça, a rousing synth-pop amalgam of singer Channy Leanagh, Ryan Olson and Bon Iver's Mike Noyce.

With all this hype, justified or otherwise, you're probably wondering what they sound like. Partly dreamy pop, partly 'ethereal' and rather blissed-out, it's a hark back to bands like Swallow, Mercury Rev and the like.

No matter what they're being compared to, Poliça are attracting attention in the UK and currently selling out shows faster than umbrellas. As proof, they've already sold out their London Heaven show on 20th November - best get in quick with these new shows then! NB - Other November 2012 shows from Glasgow to Brighton are still available.