Posted: 1st May 2012
The BRIT Award winning singer-songwriter is playing a series of smaller venues in June - tickets on sale Friday 4th May 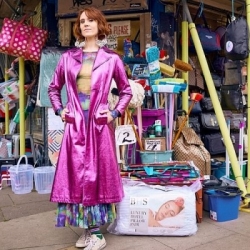 It's been a staggering five years since people stopped saying Kate Nash sounded liked Lily Allen and admitted she was a credible, successful artist in her own right. Her breakthrough was June 2007's lead single from her debut album, the noughties break-up classic Foundations.

Foundations peaked at No 2 on the UK chart and helped push the LP Made of Bricks to the top of the album countdown, turning Platinum in the process. Nash found fame across the world and it took its toll with the artist suffering what she would herself go on to call 'a proper breakdown' in 2008. At a renewed, steady pace Nash released her second full-length record, My Best Friend Is You, in 2010 and, since then, has toured and promoted the record as well as become engaged in any number of other projects; some charitable, some professional.

A third album is mooted for later this year with the north Londoner rumoured to already be filming promos to accompany forthcoming single releases and she has lined up a series of comparatively intimate dates for this June.

The tour kicks off in Edinburgh on 16th June 2012, followed by gigs in Liverpool, Manchester, Birmingham and more, before the final date announced so far at Clwb Ifor Bach in Cardiff on 30th June. We will have tickets available from 9am on Friday 4th May, priced from £15.