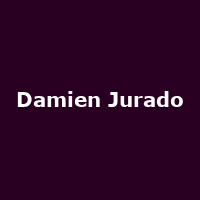 Calmly and quietly, Seattle's Damien Jurado has steadily assured himself a place in the annals of acoustic songwriting history with a respectable pile of acclaimed albums since the mid-'90s. Yet no-one seems to know who he is exactly. So, here's a brief history.

Rock band Sunny Day Real Estate's Jeremy Enigk became aware of the singer on the Seattle music-circuit and urged the iconic local indie label Sub Pop to sign him. Luckily for Jurado, the label listened, liked him, signed him and issued a series of original and unique albums during the next six years, including what many critics hail as one of his masterpieces, 'Ghost of David'.

Using found-sounds, analogue equipment and various oddities such as answering machines, Damien Jurado built up an already veritable assortment of recordings by the time he inked a deal with Secretly Canadian, a label synonymous with reflective music and lo-fi performers. 'Where Shall You Take Me?' and "Caught in the Trees' are just two of the man's more recent and successful forays, but it's his new collaboration that has started to catch people's attentions once again.

'Maraqopa' contains ten songs, recorded with and produced by another hard-to-fathom songwriter, Richard Swift. It's actually their second union - the two fashioned 2010's 'Saint Bartlett' - and continues the pair's wide-eyed attitude to music production (once again, lots of tapes and analogue techniques here) and absorption of genres, from soul, doo-wop, grunge and folk.

Having already booked himself into the Green Man Festival hotel for a slot at the Brecons event in August, Jurado has confirmed a string of UK headline shows to promote 'Maraqopa' with some intent. Armed with a fine support band in Megafaun, Damien will call at Brighton on 14th August, followed by Leeds, Glasgow, Newcastle and Camden on the 20th. Tickets are available from us now and are priced from Â£10 upwards.