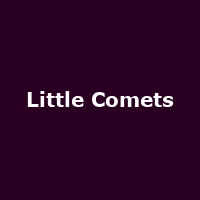 Keen-eyed and regular visitors to Allgigs will remember us steering you towards this Tyne and Wear outfit and their April tour. Increased interest and few sold-out shows has obviously had some effect because Little Comets will be back on the road, long after the final long days of summer have petered out. The Olympic Torch will also have been extinguished, but not before the band have had the chance to rock up for the Relay Finale in London's Hyde Park on 26th July. If you still want tickets, scroll down and get clicking. They cost £15 and they're selling like cupcakes, people.

So then, after garnering mainly positive reviews for their 2011 debut album, 'In Search of Elusive Little Comets', performed as part of the HMV Next Big Thing series at the beginning of the year, Little Comets will be giving that last album another shot in the arm, as well as gearing themselves up with some new ideas and songs. And let's face it - the band have had to endure swine flu (they cancelled their 2009 UK tour because of the farm-bothering virus) and major label cold-shouldering in the past, so it's payback time. You need to go and see them.

The autumn 2012 shows include Manchester on 16th October, followed by Hull, Edinburgh, Newcastle and loads more until London's KOKO on 1st November. Tickets are on sale from Tuesday morning, priced at around £10.