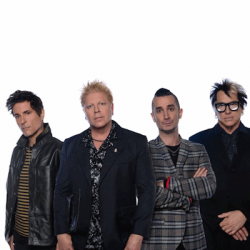 Although probably best known for their 1998 global hit Pretty Fly For A White Guy, the punk outfit from Huntington Beach in California have been leading the pop-punk crossover charge since the early eighties. Astonishingly, they will soon be celebrating their 30th anniversary.

Formed initially as Manic Subsidal, The Offspring have been reliably led by vocalist Dexter Holland and bassist Greg K ever since. Guitarist Noodles has, by comparison, served a comparatively paltry 27 years in the band while Pete Parada has been on skins since 2007 (The Offspring have been through five drummers - always the drummers).

Their big commercial breakthrough came with their third studio album, appropriately called Smash, which clattered into the charts in 1994. Peaking at No 4 stateside and reaching No 21 here, Smash went on to sell 12 million copies and The Offspring were sprung. Ever since, it has rained hits and accolades of one kind or another although they're probably still best known the white rap parody Pretty Fly For A White Guy, which topped the charts here.

This apparent spike in popularity is deeply misleading; The Offspring are a hugely influential presence in American pop-punk, taking just as much credit for the genre's burgeoning success as Green Day or Rancid. They have sold approaching 40 million albums worldwide - an impressive achievement whichever way you slice it. Their new album, the ninth studio record, Days Go By, is set for release in June and The Offspring are bringing the new material (their first album for four years) to the UK, playing two London gigs a few weeks before Days Go By hits the shelves.

The Offspring play London's Shepherds Bush Empire on Tuesday 5th and Wednesday 6th June 2012. We will have tickets available from 9am on Friday 4th May, priced at £27.50.