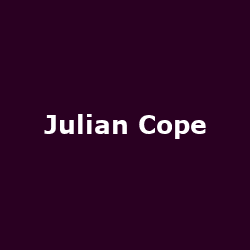 The transformation of an artist who had it all at his fingertips, then duly peed on fame's fickle fire from a great height, couldn't be better documented than with Julian Cope. The Welsh songwriter was initially associated as being the enigmatic frontman for revered psychedelic-pop janglers, The Teardrop Explodes. Named after a Roy Lichenstein animation, Julian Cope's charges released a relentless treasure-trove of rather colourful pop-songs, including 'Treason (It's Just a Story)', 'Reward', 'Passionate Friend' and the totally-should've-been-a-massive-hit 'Tiny Children', as well as a pair of solid albums in 'Kilimanjaro' and 'Wilder'.

Internal wrangling and tensions brought the band to an end, which prompted Cope to head off in search of solo love (pardon the expression). After a couple of false starts, it didn't take him long before he was back on Top of the Pops with another hit, entwined with an elaborate mic-stand and staring eyes, belting out the familiar strains of 'World Shut Your Mouth'. Somehow, given his future tendencies and interests, this song has ended up as something of a clarion call, as well as his biggest flirtation with 'fame'. He notched up several more minor successes, including the acclaimed but American-rock tinged 'Saint Julian', the poppy 'My Nation Underground and the first hints of resistance against being on a major-label, 'Peggy Suicide' and 'Jehovahkill'.

After the '90s fizzled out, Julian Cope left the music industry far behind him and turned his attentions to running his own affairs, psychedelia, global greed, his beloved Avebury, Neolithic architecture and the contentious world of Krautrock. In short, he became an institution. Others just labelled him a hippy - but what do they know? A scan of his website suggests that Cope has become smarter by simply reading, learning and railing against the fools. A private revolution turned public.

Uprisings, conspiracies and a nod to previous influences form part of the Archdrude's 2012 schedule as he unveils his first headlining shows for the latter half of the year, as well as two scheduled albums entitled 'Psychedelic Revolution'. The first, out now, deals with Che Guevara and Leila Khaled, two recognizable heroes and heroines of Cope's and ripe for a bit of sonic massaging and full-on out-there progressive arrangements and lyrics. Naturally, this will make sense when performed live and that's just what Julian Cope intends doing in the autumn.

First stop on the UK 2012 tour is Leeds on 21st September, followed by Gateshead and then Reading and Bristol in October. Tickets for all four shows are on sale now, priced at £19.50. Other dates are expected to be added in due course, meanwhile the man has a habit of selling out his gigs so best grab these quick.