Halestorm set to reign in the UK in autumn 2012 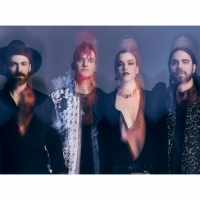 As the UK recovers from an incredibly wet and windy April, we can look forward to another torrential onslaught in the early autumn as siblings Lzzy and Arejay Hale and their band bring their European tour this way.

The east coast four-piece have built a reputation founded on energetic metallic rock and their penchant for punishing live schedules, frequently clocking up hundreds of thousands of miles and playing more than 250 gigs a year. The sister and brother have been playing together since kindergarten and their shared musical sixth sense manifests itself as a tight, disciplined outfit of growing repute.

Halestorm's self-titled debut, released in 2009, made a limited impression here but reached the US Top 40 and set the band on course for a career which would feature plenty of high profile TV exposure thanks to brands as powerful as the chat shows of Jay Leno and Jimmy Fallon and also getting the Glee treatment. The second record, The Strange Case Of..., released this month, has already made No 15 on the main Billboard chart and No 2 on the US Rock Chart and Halestorm are bringing their new album to the Europe in the early autumn.

Arejay and Lzzy Hale will be taking their band off around the UK beginning in Birmingham on 21st September, followed by dates in Glasgow, Manchester, Leeds, London and more, before the final gig at The Fleece in Bristol on 1st October 2012. The London show is at the Islington Academy on 28th September.