Posted: 25th April 2012
The Detroit six-piece are heading out on a late autumn tour to mark ten years since the release of their breakthrough LP, Fire - tickets now/Friday 27th April 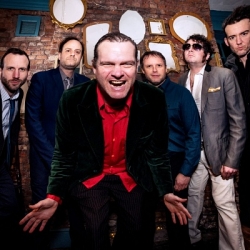 It was nearly a decade ago that the charts first reverberated to the camp rock stylings of 'E6' and their high-energy funk-rock floor-fillers. First there was the theatrical disco rock lunacy of 2002's Danger! High Voltage and then the enlightened post-9/11 world opened its arms to the proud sounds of Gay Bar.

There was a time when Radio 1 DJs may have winced at the sounds of Gay Bar (no names but looking at YOU Mike Read) but the leading jock in 2003 was chirpy Boltonian Sara Cox and times were different. Gay Bar became a badge of honour for her breakfast show and the song reached the UK Top Five, following the No 2 success of Danger! High Voltage. Ironically, with the world no longer in denial about the existence of homosexuality, it was in fact the song's lyrics about war which caused a stir at a time when the US were busy redecorating Iraq with stars and stripes.

The parent album for E6's two-pronged chart assault was 2003's Fire. It remains the band's best-selling and performing record and E6 are celebrating the decade since its release by performing the LP in full at a series of autumn shows.

Electric Six kick off their Fire tour in Glasgow on 29th November, followed by Dublin on 1st December, and then more mainland dates beginning with Liverpool on the 3rd, before the final show at London's Shepherd's Bush Empire on Saturday 15th December 2012.

Tickets for London are available now, priced £15. We'll have tickets for the remaining dates at 9am on Friday 27th April, priced £12.50 for the UK shows and 20 for Dublin.

In the meantime, frontman Dick Valentine is heading out on a solo tour in May and June, with dates starting in Oxford on 18th May and ending in Brighton on 2nd June 2012. We have tickets available now, priced less than a tenner.