Lucinda Williams returns to the UK for two 2012 London shows 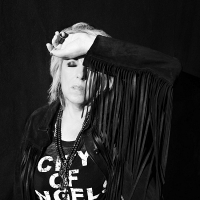 For an artist to have taken 22 years to break into the UK album chart, you'd have to be wondering what on earth was Lucinda Williams doing wrong for so long. More likely, us Brits were too busy trying to be cool, taking drugs and spending way too much money the last time this Louisiana roots-rocking singer turned any heads over here.

Perhaps her first two mildly-acclaimed albums, 'Ramblin'' (covers) and 'Happy Woman Blues' (self-penned) were too generic and devoid of any stand-out quirk or, for that matter, songs. Some eight years after that self-written sophomore set, Williams courted her muse, rediscovered her mojo and temporarily abandoned christening her next album with anything but her own name - it worked. 'Lucinda Williams' was suddenly being nominated for Grammys, winning one for the cracking pop-country single, 'Passionate Kisses' (issued in the UK by Rough Trade, of all people). If ever there was a song that should have notched up her first hit, it was this. Sadly, it wasn't.

Her next release, 1992's 'Sweet Old World', dealt with suicide and death which, despite being rather gorgeous in places, was as commercially viable as Bruce Springsteen's stark and lowly 'Nebraska'. Finally in 1998, her Grammy-winning 'Car Wheels on a Gravel Road' broke the mould and kickstarted her career. Her following five albums, including last year's 'Blessed', have been successful on both sides of the Atlantic. Result.

In the autumn, Lucinda Williams will be returning to the UK for two London shows, her first for three years. You can catch her perform two contrasting shows at the Royal Festival Hall on 10th and 11th November, playing songs from right across her repertoire of rock, country, blues and even jazz. We have tickets for both shows available now, both priced at £45.