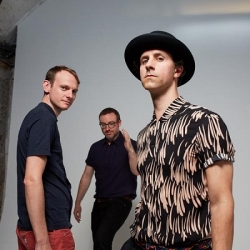 Maxïmo Park will soon be performing a short UK tour at around the time of the release of new album "National Health", starting with a slot at this year's Evolution Festival in Newcastle, followed by Birmingham on 6th June, Manchester on the 7th and finally London on the 8th, before appearing at this year's Hop Farm Festival in Kent. But you know this already because you will have either grabbed tickets to one or all of these, or you're sitting about moping because Maxïmo Park's headline shows have all sold out! Fear not - dry your eyes mate, there's now a full autumn tour coming as well.

Paul Smith and his charges have anticipated a healthy response to their new album and have released details of a November 2012 UK tour, starting in Liverpool on 1st November, followed by Glasgow, Newcastle and many more until Portsmouth on the 10th. There's a London show in there as well (possibly turning into two, depending on demand) and tickets will go on sale via us from 9am on Friday 1st June.

During the past dozen years, Maxïmo Park have enjoyed considerable respect from a sizeable legion of fans, not least for their tenacious debut album 'A Certain Trigger'. They were nominated for the Mercury Music Prize and had the auspicious accolade of being the first band to ever play an Ibiza Rocks opening party. Get in! Two more albums, the Gil Norton-produced 'Our Earthly Pleasures' and Nick Launay-tweaked 'Quicken The Heart' have ensured the spikey Northerners have been earning plenty of beer-tokens.