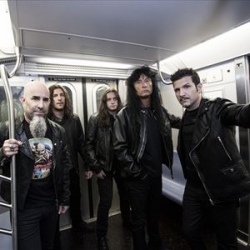 In some ways, Sonisphere's downfall has been many a metal fan's nightmare - but, look at all the tours and special one-off shows you can now go to that you couldn't afford to otherwise! Due to appear this year were Motörhead with whom you were very likely to be spending a fabulously noisy hour at the most, probably in the pouring rain with the added joy of half a bottle of lager-tinged urine landing on your head at some point. Shame. And, if you can't afford to hit Download as an alternative to see another blisteringly cacophonous outfit from the annals of thrash-metal, i.e. Anthrax, what are you going to do?

Hell, if you love both those bands, you're going to wet your denims over this - Motörhead and Anthrax will be joining forces for the former's next UK tour in November 2012. Billed as The World Is Yours tour, the title of Lemmy's last full-length album granted, this ten-date jaunt will give fans the chance to witness the band perform new songs from what will be their 22nd studio album, due out at the end of the year. With Anthrax as support, you can be guaranteed quite a show. Their recent album 'Worship Music' (their 10th) gave them their first Top 50 album since 1993 and heralded the return of long-time vocalist Joey Belladonna.

Wolverhampton is the first stop on 5th November 2012, followed by the likes of Manchester, Newcastle, Glasgow and many more including Brixton on the 17th and finally Bristol on 18th November. We will have tickets on sale from Friday 27th April at 9am, priced from £27 upwards.