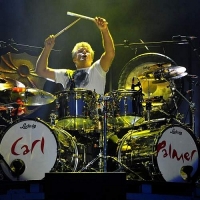 Basically, the drummer has contracted a hefty dose of the potentially lethal E.Coli bug and has been ordered to rest up. All of which means the remaining trio of Geoff Downes, John Wetton and Steve Howe have been forced to throw in the towel at short notice and cancel their upcoming UK dates, most of which had sold out well in advance. We wish Carl all the best.

Meanwhile, tickets are refundable for all seven shows affected, from Tavistock to Shepherd's Bush, from the original ticket-agent or purchase-point.