Posted: 20th April 2012
Forty years into their career, English prog rock outfit Magnum are planning to release a 17th studio album in the autumn, the accompanying tour is on sale from Saturday 21st/ Monday 23rd April 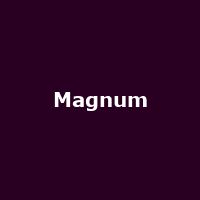 There was a time, in the late nineties perhaps, where the great traditions of English prog rock were sneered at to such an extent that it seemed unlikely that it would ever enjoy a resurgence. A decade-and-a-half on and Britpop has stopped pilfering the motifs of the mod era, moving instead into first eighties-inspired electro-pop and then seventies-fuelled rock.

Prog's apparent theatrical self-parody was, for too long, sitting on the outside looking in. A chapter best forgotten; a cul-de-sac with a gate rusted shut. Magnum, in truth, have always been on the harder side of prog rock and this perhaps hints at the reasons for their longevity. In four decades there has been just one hiatus (of around five years, in the late nineties) and the line-up still boasts two founding members - vocalist Bob Catley and guitarist/singer Tony Clarkin.

The band's seventeenth studio album, On the 13th Day, is scheduled for release later in the year and Magnum will be taking the new material on the road in November.

The On the 13th Day autumn tour kicks off in Bristol on 18th November, followed by dates in Liverpool, Glasgow, Manchester and more, before the final gig in Wolverhampton on 1st December 2012. There is a London show at the Islington Academy on 29th November.

Tickets go on sale Saturday at 9am (Manchester, Nottingham and Glasgow), with the remainder on sale from Monday at 9AM - and we'll have them right here, costing £22 for London and £18.50 for all other dates.