Posted: 20th April 2012
The legendary funk-rockers continue their renaissance with a headline show at the Hammersmith Apollo in July, tickets Tuesday 24th April 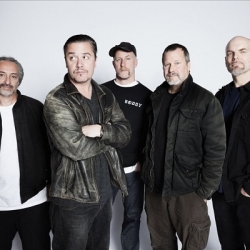 Oh, ye of little faith. When news of Sonisphere's cancellation reached rock music lovers recently, it wasn't just the fans of Queen who hung their heads at the prospect of missing out on a rare performance from one of rocks biggest acts. Since reforming in 2009, after an initially busy touring schedule, shows from Californian funk metallers Faith No More have been equally as elusive.

Formed in San Francisco in the early eighties, Faith No More quickly earned a reputation for 'out there', borderline experimental rock coupled with undeniably funky basslines. It took a few years for the sound to mature but, in 1987's We Care A Lot, FNM found a launchpad to rocket them into the mainstream, smashing about in a West Coast sea of poodle rock prima donnas like a bull in a guitar shop.

Credited as inventing the 'alt-metal' genre, FNM's biggest albums were 1989's The Real Thing and Angel Dust, released three years later. We Care A Lot (single) was followed in some style by global hits including From Out of Nowhere, Epic and Midlife Crisis, the latter a 1992 No 1 on the US Alt countdown.

Rumours of new material persist but, to date, FNM have not released any studio records since 1997's Album of the Year. There have, however, been seven compilation releases since the initial split, including 2009's wryly titled The Very Best Definitive Ultimate Greatest Hits Collection. As always, FNM's peerless musical credentials come with a generous dollop of tongue-in-cheek humour.

Faith No More play the Hammersmith Apollo on Sunday 8th July 2012, the date they were scheduled to appear at Sonisphere. We will have tickets available from 9am on Tuesday 24th April, priced £33.50. Sales are expected to be, well, Epic.