Lawson to accompany debut release with May 2012 tour

Posted: 19th April 2012
The pop-rock four-piece are touring in May, ahead of the release of their debut single at the end of the month; tickets on sale Friday 20th April 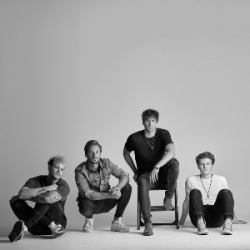 With One Direction currently being compared (by imbeciles) to The Beatles, thanks to their undeniably impressive record-selling feats, you could be forgiven for thinking that the world cares only for paper pop from 'vocal groups' cherry-picking the best shots from Cowell's canon. But that's just what the liquorice-headed one wants us to believe.

Thankfully, not every young man wants to trade in the instruments for momentary worldwide acclaim and all the Vimto he can drink. Some still care about making music rather than just singing it in order to be famous. Not that Lawson eschew celebrity. One look at their website and promotional material confirms they are good looking lads, probably seeking every benefit of fame and fortune. Like Busted and McFly before them, their credibility stretches way beyond that of many of their chart peers simply because they are writing the songs themselves.

Whether the music will be good enough is the chance that Andy, Adam, Joel and Ryan take when their debut single is released next month. But, judging by new track When She Was Mine, their brand of hook-filled pop-rock should have little trouble finding an audience. Good luck to them.

The May tour kicks off at The Cockpit in Leeds on 15th, followed by dates in Nottingham, Sheffield, Manchester and London, before the final date announced so far at the HMV Institute in Birmingham on 31st May. The London show is at the King's College Students union on 30th May. We will have tickets available from 9am on Friday 20th April, priced £11 for London and £10 for all other dates.