Levellers set for November 2012 Static On the Airwaves UK Tour

Posted: 17th April 2012
The folk-rock vagabonds are releasing a new album in June and taking the new material on an 11-date UK tour in November, tickets on sale Friday 20th April 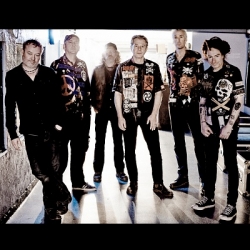 Despite a demeanour evocative of a rag and tag, rumble-tumble outfit of wanderers and minstrels, the Levellers have emerged as a reliable alt-rock outfit as any of the last 20 years. And they've built this pedigree off the back of a rock-steady line-up led by Mark Chadwick and a stunning back catalogue of fiddle-rich indie-folk sing-alongs.

There have been 11 albums, including 1995's UK No 1 record Zeitgeist, and a long list of memorable indie standards including One Way, Far From Home, Julie and What A Beautiful Day. The output has rarely wavered and never strayed from the Levellers' founding principles as an indie-folk band founded in the English traditions. All of which has been overseen by Chadwick (on guitar and lead vocals), Jeremy Cunningham (on bass guitar), Charlie Heather (on drums) and Jon Sevink as violinist and, at a stroke, a vital part of the Levellers sound.

With their 25th anniversary on the horizon, the Levellers are showing no signs of slowing with a new album, Static On The Airwaves, released in June and Chadwick and co are taking the new material on an autumn tour.

The 11-date tour begins in Cambridge on 14th November, followed by shows in Bristol, Manchester, Liverpool, Glasgow, London and more, before the final gig at the Southampton Guildhall on 25th November 2012. The London show is on Saturday 24th November at the Shepherds Bush Empire. We will have tickets available from 9am on Friday 20th April, priced from around £22.50.