Pond set to visit the UK for spring 2012 tour 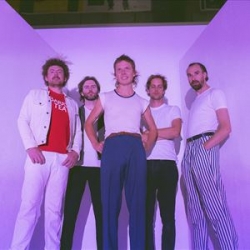 When you're a writer faced with compiling an article about a band you know little about, the task isn't made any easier when you read a band member list on their Facebook page that features a Wirey B.Buddha, Shoseph Orion McJam, Odin Bombadillo and Celestius Maximus Argyle. Thanks Pond, thanks a lot. At least you've gone and made a decent album to go with them.

Formed in 2008 from various members of Aussie outfit Tame Impala, Pond were initially an experiment in white noise and psychedelic pop with the resultant album 'Psychedelic Mango' as bonged out as you could wish to, or bare to, have. The core trio of Nick Allbrook, Jay Watson and Joseph Ryan continued with this experiment for another couple of years until they came up with their most accessible and acclaimed effort to date, the breakthrough 'Beard, Wives, Denim' album in 2012. Fitting in perfectly with the off-the-kerb roster at Modular Records, the album is a curious amalgam of Aussie rock, scratchy funk and stone-wall feedback. In short, it's a beauty and a beast.

Over here in the UK, we've rather taken to Pond and the album has sold fairly well. So well in fact that the band plus extra musicians are heading over here for a short tour in May. First stop is Leeds on the 19th, followed by Birmingham, London, Milton Keynes, Glasgow and finally on the 26th, Manchester. Prices for tickets are rather moreish - you can expect to pay under £10!! All are available now.