Posted: 13th April 2012
The former Supergrass frontman is taking his new solo material on the road with a series of spring dates, tickets on sale now 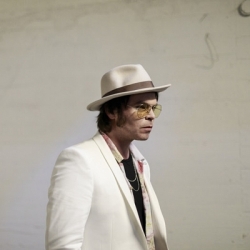 It's taken him 18 years but one of Britpop's leading lights, Supergrass frontman and songwriter Gaz Coombes, is finally going it alone with his debut solo album and a clutch of dates to promote it.

It was 1994 when three likely lads from Oxford first burst onto the scene with their indie anthem Caught By The Fuzz and their sunny energetic sounds were soon helping set the mood for the three or four summers of Britpop which followed. A few months later, their single Alright - still a frequent visitor to indie playlists everywhere - was reaching No 2 in the UK chart and topping the US Rock Chart.

The debut album, 1995's I Should Coco, sold more than a million copies and turned Platinum in the UK, where it was a No 1 record. Along with the sounds of Pulp, Blur, Oasis and Ocean Colour Scene, the tunes and motifs of I Should Coco defined the Britpop era as well as any other. And, centre stage, was the smiling singer with the huge sideburns and the 'Gaz' t-shirt.

Six studio albums later (five of which made the UK Top Ten), Supergrass packed it up in 2010 and Gaz Coombes set about working on solo material. Eighteen months or so later and it's ready to go with taster track Sub-Divider currently available on download and the first single, Hot Fruit, set for release in early May. His debut solo album, Here Come the Bombs, is due for issue on 21st May and Gaz has just announced two more shows to launch the new material, in addition to existing bookings for April.

Gaz Coombes' first date is a Club NME show at KOKO in Camden on 20th April, followed by a Barfly gig nearby on the 24th. The two additional dates are at Manchester's Ruby Longe on 17th May and then London's Bush Hall on 25th May. We have tickets available now for all four shows, priced just £5 for KOKO and around £12.50 for the remaining dates.

Gaz Coombes will also feature on the Camden Crawl 2012 (London and Dublin shows) and is playing a number of festivals throughout the summer, including The Apple Cart 2012 in Hackney on Sunday 3rd June. We've tickets for the latter for £25, on sale now.