Simian Ghost hark back to their Youth for 2012 summer shows 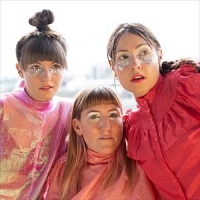 Ah, Sweden and pop music, a magical combination for sure. The entire Scandinavian region knows how to craft a melody - Abba, Europe, The Cardigans, Roxette, Ace of Base, The Wannadies, The Concretes, the list goes on (some good, some grim).

Forging their way forward with sparkly melodies and subtle lyrics are relative newcomers Simian Ghost who formed a few years ago. Well I say formed - I meant 'founded' since originally Simian Ghost was one man, Sebastian Arnström. After releasing a critically-acclaimed 2010 debut, 'Infinite Traffic Everywhere', singer-songwriter Sebastian enlisted the musical talents of his wonderfully-named drummer brother, one Eric Klinga, plus guitarist Mathias Zachrisson. And everyone knows how good 'trios' can be, eh?

Sounds-wise, they hover somewhere around Air, Niki and the Dove and the more languid moments of their compatriots The Cardigans. Rock 'n' roll they most certainly ain't but, as you can hear on the recent single 'Wolf Girl', taken from their just-released 2012 album 'Youth', they have an ear for pretty and a penchant for harmonies. They're probably worth seeing live, then?

Right on cue and in support of 'Youth', Simian Ghost will be visiting the UK for a string of intimate shows throughout the early summer, starting with Bournemouth on 1st June, followed by Leeds, Nottingham, Cardiff, London, Wrexham and lastly, Oxford on the 9th. All shows will cost from around £6, even London. The venues on this 'Best Fit' tour are comparatively small (and perfectly-formed) so expect tickets to get snapped up quickly, especially with Stealing Sheep in support.

Prior to the summer jaunt, Simian Ghost are also performing tonight at Glasgow's Captain's Rest and Southampton's Joiners on Friday - also priced from £6 or £6.50.