Posted: 12th April 2012
The LA four-piece are heading out on a short tour in support of their debut album, tickets on Friday 13th April 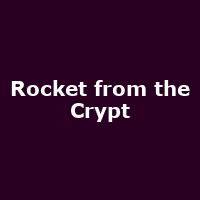 Supergroups can be a curious breed. The label suggests that a group of mere mortals from existing bands have come together to form something with exponential power.

Some, of course, are more successful than others. However, the best supergroups always seem to come with a sense of creative freedom, as if the side-project is an extracurricular activity that needs attention but doesn't count towards the final grade. The supergroup project can be a welcome distraction; a tasty cup tie which offers a hard-earned break from the gruelling league schedule.

And so it proves for Off! Formed from various bits of Rocket from the Crypt, Burning Brides, Red Kross and LA punk legends Black Flag and Circle Jerks, Off! first made their mark with a live appearance at SXSW 2010. The band's first LA show featured an original art installation by punk artist and cartoonist Raymond Pettibon (who also worked with Black Flag) in a warehouse.

Two years on, Off! seem to be enjoying themselves more than ever and a self-titled debut record is set for release next month. The quartet is promoting the new record with a tour which hits the UK in the summer.

The tour kicks off at The Haunt in Brighton on Monday 18th June, followed by dates in London (The Garage), Newcastle, Leeds and Manchester, before the final gig of the run at Rock City in Nottingham on Tuesday 26th June 2012.

We will have tickets available from 9am on Friday 13th April 2012, priced £16 for London and around £14 for the remaining dates.