Posted: 4th April 2012
Currently busying himself holding court on The Voice, Sir Tom Jones has continued to add to a range of summer gigs, all of which are on sale now 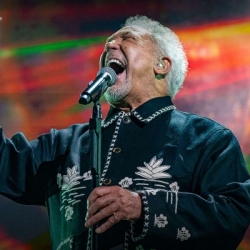 He's the silver-haired Boy From Nowhere. He's sold more than 100 million records. He's a sex bomb (sex bomb, he's a sex bomb). He is, of course, Sir Thomas John Woodward OBE aka Tom Jones and his extraordinary popularity shows no sign of abating any time soon.

Currently charming his way through BBC talent search The Voice and having comparatively recently cancelled his Just For Men subscription, Sir Tom has graduated effortlessly from sixties white soul sensation into the elder statesman of British pop. To describe him as 'much loved' would be an understatement of idiotic proportions - the man is a bona fide legend.

Since 1965, he has released 39 studio albums and, much more often than not, has enjoyed commercial success; managing to judge the mood and expectation well, whether that be with a Prince cover or a Cardigans collaboration. His last album, 2010's Praise & Blame, was a case in point - a collection of obscure gospel covers that reached No 2 and turned Gold in the process.

A 40th album (that's fortieth), Spirit in the Room, is set for release next month and Sir Tom is marking the new record with a series of live dates across the summer. First up is the Diamond Jubilee Concert at Buckingham Palace in early Jun, followed by a Gloucester gig on the 22nd.

July 2012 sees him at BluesFest 2012 on the 1st, followed by three outdoor shows; at Hamilton Park Racecourse (6th), Durham Cricket Ground (14th), Sandown Park Racecourse (18th) and then Osborne House on the Isle of Wight on 29th July.

The month of August sees another racecourse gig at Newmarket Nights, a slot at Belsonic 2012 and a slot sharing the bill with Van Morrison and Bobby Womack in Dublin on 25th August.

We have tickets available now for all these shows, varying in price but generally £30 to £40, except for the Hammersmith BluesFest date which is priced £35 to £75. Tickets for the Diamond Jubilee concert are no longer available.