Posted: 30th March 2012
'Chingford's Finest' are following the spring tour with a series of acoustic dates for November and December, tickets on sale Monday 2nd April 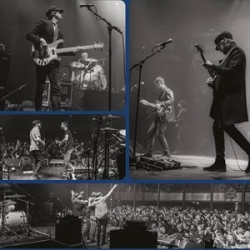 Inspired by seeing Oasis at Knebworth, Joel Stoker and Lucas Crowther formed The Rifles back in 2004. The debut record, No Love Lost, was released in 2006. It was a modest commercial success but a critical hit.

Their warm indie sound won many friends and was picked up by Sky's Soccer AM show, on which the band and their music have featured a number of times. They soon counted some famous fans among their legion too; with Paul Weller even joining them on stage in 2007 to perform She's the Only One plus a cover of The Jam's The Eton Rifles. The following two albums made the UK Top 40, including last year's Freedom Run. A fourth record is evidently already in the pipeline and there might be a sneak preview of the new material when the band embarks on an acoustic tour in the autumn.

The acoustic tour kicks off at the Liverpool Academy on 19th November, followed by gigs in Glasgow, Newcastle, Stoke, Portsmouth, Brighton and more, before the final date at Northampton's famous Roadmender on 6th December 2012. We will have tickets available when they go on sale at 9am on Monday 2nd April, priced just £11, except for Northampton which is on sale now.

Meanwhile, the spring tour continues with Rifles Weekender dates in London tonight and tomorrow, at the Shepherds Bush Empire and Troxy (tickets £17 each). In June, The Rifles play Chester Rocks 2012 on Saturday 16th June, joining The Courteeners and Cast on the bill at Chester Racecourse. We have tickets available now, priced £35.