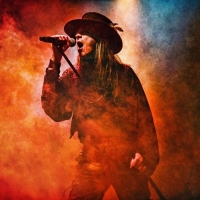 It's the mid-'80s. You've got your favourite singles by The Mission, Gene Loves Jezebel and Sisters of Mercy strewn all over your bedroom floor, your black drainpipes are itching like crazy (seems a shame to wash them again) and mum's banging on the wall for you to turn down your third copy of 'Bela Lugosi's Dead'.

Being a proper rebellious teenage-goth, you reach for the album that really annoys your parents, the one with the darkened sleeve and eerie image of a Stetson-wearing band staring out from a misty backdrop with luminous eyes. The opening track is an adaptation of 'The Harmonica Man' from the classic spaghetti-western, 'Once Upon a Time in the West'. It's loud. VERY loud. Mum gives up. It's 1987, after all. And the album is called 'Dawnrazor'. The band? Welcome to Fields of the Nephilim.

After a little over 25 years since the release of that debut album, which was all soundtrack-references, psychedelia, darkness and, let's face it, goth-encapsulated, 'The Neph' still hold sway. Unlike The Mission et al, The Nephilim had a bite to them. Subsequent albums continued the magical-hippy-goth-rock theme, particularly with the singles 'Moonchild' and 'Sumerland (Dreamed)', until the band took a hiatus in 1991. Lead-singer Carl McCoy left to form, wait for it, Nefilim, before regrouping his charges in the late '90s.

Now they are BACK! 2012 promises much activity from the band - a lavish new live 3-CD album 'Ceremonies' is first on the agenda (out now), followed by a new studio-album, their first since 2005's 'Mourning Sun' and an appearance at Sonisphere during the summer. But since the organizers pulled the plug this week, Fields of the Nephilim have just announced something far tastier - a Halloween concert at Shepherd's Bush Empire!! The show, on 31st October, will feature excerpts from their expansive career, plus new songs and surprises.

We will have tickets for what appears to be their only UK appearance in 2012 from Monday 2nd April at 9am. Prices start at £20 plus fees. The show is likely to sell out quickly.