Posted: 29th March 2012
The Scottish folk rockers are taking their new album on the road in 2012, tickets are on sale now 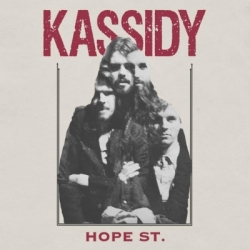 It's been barely two years since Kassidy were formed in a shared house in Glasgow but it didn't take long for the indie folk four-piece to start building a reputation as a formidable live act, courtesy of some notable festival appearances including Glastonbury and T in the Park.

It must, in some part, be down to their four-guitar philosophy - each member lined up side-by-side, eschewing the traditional 'front man' set up in favour of a more equitable arrangement. And, once they got going, there has been no stopping Kassidy. In less than 30 months since forming, they've released three EPs and a debut album, 2011's Hope St. As if that wasn't output enough, a second album is due for release next month.

Kassidy play The Old Queen's Head in Islington on 4th April, before One Man Army is released on 30th April. A month later, Kassidy hit the road again beginning at Perth Concert Hall on 25th May, followed by dates in Edinburgh, Dunfermline, London's 100 Club, Wolverhampton and Leeds, before the final headline date announced so far at Thekla in Bristol on 3rd June 2012.

After the headline shows, Kassidy play the Hebridean Celtic Festival 2012 on Thursday 12th July. We have Premium tickets available now.