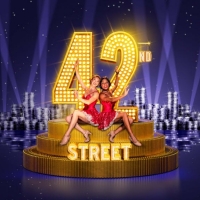 In 1980, Broadway producer David Merrick was one of the most nervous men in showbusiness as the curtain raised on his $3 million adaptation of a 1933 Hollywood movie in a production many believed was doomed to failure.

Seconds after the curtain revealed a chorus line of tapping feet, the opening night audience cheered and Merrick became the toast of Broadway. Something his protagonist director Julian Marsh would also dream of. In 42nd Street, Marsh is struggling against the financial shackles of America's Great Depression to stage the musical extravaganza Pretty Lady, casting the legendary (although past it) star Dorothy Brock as his leading lady.

Against this backdrop enters aspiring chorus girl Peggy Sawyer. Poor Peggy can't catch a break despite being quietly brilliant and her only success would appear to be in making the director fall for her. In love, he casts her in a minor role only for Peggy to inadvertently master her own destiny after an opening night accident...

Things ran much more smoothly for Merrick whose show went on to collect four Tony awards, including two for the 2001 revival, and a 1984 Olivier gong for Best New Musical. For the 2012 UK touring production, legendary West End stars Dave Willetts and Marti Webb join the cast in the roles of director Julian and the ageing prima donna Dorothy.

The tour kicks off in Oxford on 5th June, taking in five-night runs at a number of theatres across the country including Glasgow's King's Theatre (from 26th June), the New Victoria Theatre in Woking (from 3rd July), the New Wimbledon Theatre (from 11th September) and Bromley's Churchill Theatre (from 16th October), among others.

We have tickets available now, priced from around £25.