Posted: 26th March 2012
Following the May release of Not Your Kind of People, their first album for seven years, Shirley Manson and pals will be playing four UK shows in early July, tickets Friday 30th March 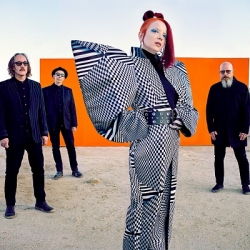 It's been around 16 years since Garbage brought a distinctively Scottish-American accent to the summer of Britpop. Among all the hype and heat of Oasis-versus-Blur and Take That packing up, Garbage, led by their eye-catching lead vocalist Shirley Manson, quietly sold 4 million copies of their debut record.

Accompanied by the cut and thrust of singles like Stupid Girl and Only Happy When it Rains, Garbage became a huge success story through the mid and late nineties, eventually amassing record sales in excess of 14 million units. There were awards and three more Top 20 albums in the US and UK before a 2005 hiatus. Not that their star was on the wane, not at all - their fourth album, 2005's Bleed Like Me, was another global hit, peaking at No 4 in the US and here.

Shirley Manson began work on an as yet unreleased solo album and there was a reunion of sorts in 2007 before Garbage ended their 'indefinite hiatus' in 2010, with promises of tours and new material. The band's fifth studio album, Not Your Kind of People, will be released in 14th May (a few days after Garbage play a London show at the Troxy), with Shirley and co taking the new material and a back catalogue of dark moody indie soon after.

Garbage kick off the short tour at the Brixton Academy on Sunday 1st July, followed by shows at the Wolverhampton Civic Hall and then the Manchester Academy, before the final show at Glasgow Barrowlands on Wednesday 4th July 2012. We will have tickets available from 9am on Friday 30th March 2012, priced from £27.50.

Ahead of the tour, Garbage play that gig at London's Troxy on 9th May (£29) and then follow the summer UK dates with an appearance at Bilbao BBK Live 2012 on Saturday 14th July 2012. We have tickets available now for both.