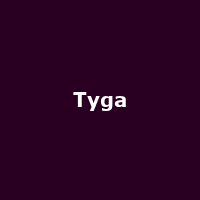 At first glance, rapper Tyga looks for all the world like a 'together' Dappy, which some may argue isn't going to endear him to serious rap fans, but will cause mild hysteria and incurable whimpering amongst many others. Clad in more tats than a boatload of wrestlers, with the largest bearing the legend 'Fear None But God', real-named Michael Nguyen-Stevenson clearly has something to say. And a craftsman for a tattooist.

Whether his words carry as much weight as his inks, remains to be seen - one glance at the title of some of his many previously-issued mixtapes suggests he does. 'Young on Probation', 'Outraged and Underage' and 'Black Thoughts' aren't the stuff of CBeebies perhaps, but are a sign of prolific and intentional outpourings.

As well as dishing out those self-released digital 'mixtapes', some with the likes of Chris Brown, Lil Wayne and Bow Wow as guests, attentions have turned to earning a dollar and getting his Tyga feet into bigger venues and more lucrative company. His first album in 2008, cheekily tagged as 'No Introduction', set the scene along with lead single 'Coconut Juice', but didn't cause quite the controversy as his most recent album, the follow-up 'Careless World: Rise of the Last King'. Offending the Martin Luther King estate is probably not the done thing, yet an uncredited sample of the great man's key speeches on its title track (Ironically) drew attentions from a few legal advisors. Thankfully, the issue blew over - job done and all systems go.

And those systems have certainly been 'go' with a '!' - Tyga is now a Top 10 artist in the States after tearing up the Billboard-listings with the album and a huge hit in 'Rack City', also a minor hit over here. To this end, the rapper is heading this way for a string of eagerly-anticipated shows in May, starting with London's IndigO2 on 23rd, followed by Manchester (24th), Birmingham (25th), Glasgow and finally for now, Bristol (28th).