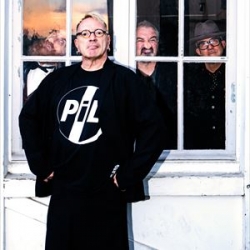 After the show-stopping firework that was the Sex Pistols fizzed its last and blinked out, punk rock, in its earliest incarnation at least, was also on its way out. 'The establishment' against which punk 'rebelled' was no doubt pleased that the monarch-bothering upstarts had been cast far and wide and the nay-sayers quickly set about preparing anecdotes, to tell their grandchildren, of Their Part in the Rise and Fall of Punk.

A bit like Thatcherism, the noisy painful birth of British punk was an event at which even those far too young to remember now pretend to recall with sudden clarity. Just ask the tens of thousands who attended the Pistols' gig at Manchester's tiny Lesser Free Trade Hall or the millions (and millions) who didn't vote for Maggie time and again, landslide after landslide.

No, punk is everyone's favourite false memory fuelled, in part, by the episodic revisiting of clips of spotty, sneering 'musicians' hacking helplessly at long-suffering guitars while railing against James Callaghan's latest policy. It was, one suspects, bloody brilliant. Johnny Rotten swearing (swearing!!) on the telly, the DJ patriarchy at Radio One having kittens and no one knowing what this meant for Demis Roussos.

We digress. As its poster boy, this 'movement' (you have to call it that) enjoyed the blotchy sneers of John Lydon. And, after the Sex Pistols grunted their last, he quickly formed Public Image Limited with Jah Wobble and, in true punk style, became 'the first post-punk band'.

Three decades later and, after a considerable hiatus that sadly bypassed Britpop's attempt at attitude (i.e. little Liam Gallagher), PiL came back with the distinctive feel of a national treasure. The last album was in 1992 but, without so much as a 'f*** off', fresh material is expected this summer with the release of a new album, 'This is PiL'.

The summer dates kick off in Bournemouth on 31st July, followed by gigs in Reading, Wolverhampton, Hatfield and more, before the final two shows in Brighton on 15th and 16th August.

We've Standard tickets available now for Wolverhampton and Blackpool (part of Rebellion Festival 2012), priced from £25. The Brighton dates are already nearly sold out - we have some Premium tickets available for both nights.

We will have tickets for the remaining gigs when they go on sale at 9am on Friday 23rd March, priced £25.

Ahead of the busy summer, PiL are playing two shows at London's Heaven on 1st and 2nd April. We have Premium tickets for the first gig and Standards available for the second, priced from £20.