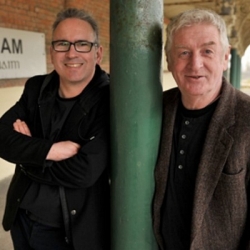 Possibly Ireland's foremost live band have consistently been revered in their home country since the late '80s, yet have still not taken the UK by storm - perhaps some things just aren't to be. The Saw Doctors are probably not that bothered - the rousing rockers have chalked up fourteen Irish Top 10 hits including three number ones, spread throughout their 22-year tenure as chart-botherers.

With their influences being on as broad a palette as you can get, it's not surprising that the band's line-up has been a little turbulent over the two decades, with nearly a dozen departed members etched on The Saw Doctors' nameplate. The quintet currently includes founder members Leo Moran and Davy Carton, as well as rock royalty in the shape of Anthony Thistlewaite, erstwhile founder, saxophonist and bassist of The Waterboys - stability has perhaps finally come home.

In the past few years, The Saw Doctors have reissued their (and Ireland's) biggest-selling single, 'I Useta Lover', scoring a second hit with it, notched up a third #1 single with 'About You Now' and liaised with '60s dreamy-pop icon Petula Clark for a festive rendition of her own 'Downtown' classic. Naturally, the accompanying video featured city streets (Galway) alive with jolly natives and large glasses of booze. Great craic.

And it's the same style of craic that you can expect when The Saw Doctors head to the UK in the autumn for an extensive tour. Time to charge your glasses and head to Cambridge on 26th November, followed by York, Edinburgh, Liverpool and lots more, including a new show in Bridgwater, until Newcastle on 19th December. We have tickets for all shows, priced at £21.50-£23.

In addition, The Saw Doctors are performing a one-off show in Warrington on 25th May (£22), as well as festival slots at Cragfest 2012 in Yorkshire (26th May) and Cropredy Festival 2012 on 10th August.