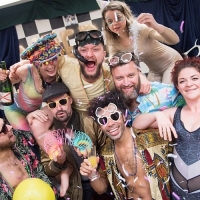 With second album, "Death to the One-Trick Pony", out on Monday, ska-punksters Imperial Leisure will embark on a lengthy tour starting on Thursday.

London's XOYO sees the band open the tour on 22nd March, with further dates in Brighton, Southampton, Sheffield, Birmingham, Milton Keynes and many more until Bristol on 28th April, with a stint at Nottingham's Hit The Deck Festival 2012 on 22nd April in-between. Tickets start at just Â£5 for Oxford, rising to Â£8 for London, Brighton and Bristol and we've got five pairs going to Isabelle Smith, Chelsey Grunshaw, Simon Sims, Charlotte Procter and Stuart Morris as winners in our recent competition.

This was a busy competition for an in-demand band, and tickets are still available for all dates but are now selling fast - check them out in the video, above.